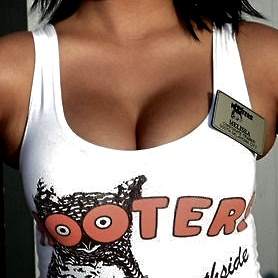 Don’t count on pink to save your hOOters from cancer

Would you like some milk? Or how about a soft drink, a mixed drink or some dessert? It’s ironic that the Hooters menu features some of the very foods that may be detrimental to bosoms. Many of these foods, along with hamburger buns. sauces and other items on the menu are laced with high fructose corn syrup made from GMO corn.

Not long ago I heard that Hooters was considering starting a home delivery service called Knockers. JB. Surveys consistently show that most men like knockers. And many of them are willing to do just about anything to fit them into their daily routine. Hooters put the idea on hold for now, however, because some of the young women were having trouble getting through the training.

Knock knock.
Who’s there?
Madam.
Madam who?
Madam foot is caught in the door.

Knock knock.
Who’s there?
Doris.
Doris who?
Doris locked, so I had to knock. AT

Men gather together to keep their eyes on Hooters. The NFL Shop sells more than 1000 pink products in a category they call “breast cancer awareness gear,” to make sure that all Americans know how bad the problem is. Breast cancer is the most common type of cancer in American women, who have about a 1 in 8 chance of being diagnosed at some point in their lifetimes.

But I can’t help but wonder why adults need to pay for gear to prove they’ve been informed of this? Kids get gold stars on their foreheads in kindergarten and that’s cute. But men wearing pink ribbons is like women putting blue balls stickers on their faces. The most common forms of cancer in men occurs in their prostates or on the skin of their heads or faces.

Don’t buy this pink stuff! It won’t do anything to save your boobs or your wife’s, whatever the case may be. Monsanto, cancer centers, pharmaceutical companies and even the NFL are all profiting from this pinkwashing. 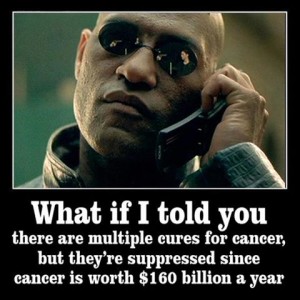 Football was an obvious choice for pinkwashers who knew it would be a bad idea to promote pink at the olympics. Why advertise that we have one of highest rates of breast cancer in the world? BBC News Magazine. The pinkwashers don’t want this kind of news to make headlines. If foreigners leak information to Americans about what they can do to help prevent it, it would be bad business for insurance companies, cancer centers and big pharma.

It’s hard enough on women who are told by their doctors and insurance companies that they need annual mammograms. For the men out there who’ve never experienced a mammogram, imagine this. Another man places your wiener between the refrigerator and its door. Then he pushes on the door as hard as he can until you’re sure your wiener has become a sausage patty. Or picture another man maneuvering your joystick on an ice block and then putting another heavy ice block on top, crushing it down on you until you doubt whether you’ll ever experience joy again. CC

What Pink Ribbons founder, Jane Weiner, did to help save her sister is certainly admirable. It’s always nice to hear a success story about someone saving the life of a loved one. But this pink thing has gotten completely out of control. Now you can buy pink just-about-anything or participate in a pink walk, run or bike ride to raise more funds for cancer centers and pharmaceutical drugs that “cure” women through inhumane tortuous treatments.

During football season, millions of Americans tailgate and then sit back to drink and eat junk food while they cheer on the few dozen guys in the stadium who are actually getting some exercise. The next time you see a team sporting pink gloves, socks or shoelaces, here’s what you need to realize. The corn chips, popcorn, candy, soft drinks, and mixed drinks full of high fructose corn syrup sold at these “sports” stadiums are increasing your risk of cancer. And you’re forking out the dollars to put these addictive and GMO poisons into your body! Non GMO Project.

Watch this clip to see the effects of eating Monsanto GMO corn . . .

Take a look at the Pink Ribbons website. You won’t find any information about prevention. It’s all about supporting cancer centers and the drugs and treatments they sell.  They’re helping to fund the “cure” side of the issue which is exactly why pink has become so popular. The “cure” industry is big business and it’s fully entrenched in every aspect of American culture. 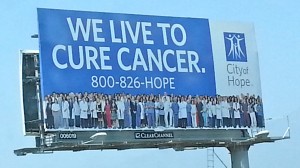 Angelina Jolie was busted. But thanks to American medicine and places like City of HOPE, she isn’t anymore. Read the signs. Americans build cities around Hospitals, Oncologists, Pharmacies, and Expenses.

Women who face breast cancer certainly need help and much more support than their bras can offer. They need more solutions. And we also need more organizations focusing on prevention for other women who want to keep their breasts along with the rest of their body parts.

If you’re looking for less traumatic cures, contact the Burzynski Clinic, Gerson Institute, Hoxsey Clinic, Cure Naturoli Cancro, or other similar centers in the US or abroad. If you’re aware of others, please let me know and I’ll add them to this list. Chances are, you’ll have to come up with the money on your own. Even if you have insurance, they’re not likely to cover “alternative treatments” since most insurance companies are in bed with the rest of the pinkwashers. Your doctor, cancer center and insurance company wants you to fear anything outside their fortress walls.

What can women do to reduce their risk of breast cancer? Check out Dr. Mercola’s articles Why Medicine Won’t Allow Cancer to be Cured and Breast Cancer Breakthrough for some great tips. Learn why Evita Ramparte rejected surgery, chemo and radiation, and instead choose to cleanse her body and mind to cure her cancer. And watch these movies:

A flat-chested young lady went to a doctor for advice on enlarging her breasts.

“Every morning during your shower, massage your breasts and say ‘scooby dooby doobies, I want bigger boobies.'” the doctor told her.

She did this faithfully for several weeks and it seemed to be working. But one morning she was running late and forgot her morning ritual. She didn’t want to lose momentum so she began her ritual on the bus. “Scooby dooby doobies, I want bigger boobies.”

A guy sitting nearby said, “Do you go to Dr. Hugh G. Rection by chance?” MBS 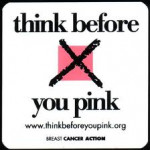