THIS POST IS IN DRAFT FORM AND STILL PENDING EDITS

“We define art is as almost any creative activity. Over the years, we’ve had theatre, music, visual arts and exhibitions on practical design as well as experimental design,” Joe Miller said.

Mission statement: Works/San José believes that thriving communities support artistic experimentation. Therefore, we serve as the South Bay community’s creative laboratory where people can experiment, exhibit and engage with art and with each other. We achieve our mission by providing an accessible, supportive and welcoming art center.

They had a show for the design of transit in the South Bay.

There are a number of ways you can get involved with art and people through Works/San Jose:

“We’ve gotten as many as 900 visitors on a South FIRST FRIDAYS. It’s the lion-share of our audience each month. It’s how a lot of people first get to know us,” Joe said. “On First Friday, there are a very diverse group of people who come to see the art. We bring in shows that spark conversation among people who may not otherwise talk.” If you want to visit Works on a Friday, keep in mind there’s no official First Friday in January or July.

Participate in an event held at Works/San Jose

Words Drawing Music is a comunical creativity night. This  It’s a good synergy. It’s a fun, friendly environment where artists, musicians and writers get together to share their creative works.

Poetry Center San Jose sponsors Well-RED, a monthly poetry reading where selected local poets have the opportunity to read their works. This is an informal gathering where members and guests can meet and greet fellow poets.

Flash Fiction Forum was brought in by its founders, Tania Martin and Lita Kurth. They used to hold their monthly event in member homes, but as their membership grew, they needed more space.  If you plan to attend this event, arrive early to get a seat. Works has about 50 stacking chairs. This event is so popular that they sometimes run out of chairs.

Music night is typically held the closing night of each exhibit. It’s an all-ages, alcohol-free event where they serve sodas, water and snacks. They sometimes have a speaker associated with an event.

If you’re looking for a space for your event, feel free to contact Works with the details to see if it might be a good fit.

“Works was set up to be accessible by artists in the area. Even if it’s someone outside the area, we’re open to it. We wanted to be smaller-scale and able to turn on a dime to help foster shows that other places won’t take on. In some cases, it might not be considered appropriate or even art,” Joe said.

For many people it’s the first time people are exhibiting or Curating. They’re really into giving people that first chance. It’s nice when you have someone with a resume, but it’s not a requirement. It’s the only place in the area where almost all the proposals all of the content from the exhibits come from the public. They’ll consider it. The person needs no experience. It’s unique in this area. You don’t have to be an institute where the programming is much more restrictive.

“We tend to shy away from art-only concepts. We try to go for communal global concepts. It doesn’t have to be an earth-shattering concept like global warming, but we’re looking for things that start conversations, that start dialogues between segments of the community that may not otherwise talk to each other,” Joe said.

Each exhibition usually has 25-50 artists on display, so when those people invite their friends and family, we usually get about 300-400 people. The proposals we take are open to the public. The proposals can be as few as three people, but others are as large at 60 such as the T-shirt show which was curated by _____?

The show was shown at Liquid Agency re-showed the exhibit. They also helped with the funding of the show here. Everything was made just for the show. So it may be displayed at the service center for VTA. It’s a public center so people can get passes or do whatever business they need to do with the VTA. They have space to do an exhibit.

The concept has to be clear and they have to see that the community can get something out of it. The next one coming up is The private is public. There are private moments that people do out in a street setting, sometimes by choice and sometimes not. Some people don’t want to expose themselves in the real world. They have park-like settings and sleeping in public and other personal moments.

But they have partnered with groups like the South bay coalition of sculptors.

With a crack in the earth 51 pieces were submitted and 51 were accepted. This is unheard of in the art industry.

Some shows last for six weeks, but most are about three. We have about 8-10 shows a year.

“We typically get about 100 items for our annual auction,” Joe said. “We generally don’t restrict people on sizes, but we do ask them to take our space into consideration.”

“It’s a benefit auction, so it’s also open. We’ve never rejected a piece. We try to get people to think that it’s for sale. There’s no such thing as experimenting too much, but we also tell people that we can’t sell a pile of dirt,” Joe said. “It’s a condensed show. It opens on First Friday in December for eight days in a row and then the auction is on the following weekend. You can also see and bid on the pieces online.”

Works doesn’t have a single employee. Everyone is a volunteer. They’re open several days a week and they depend on volunteers to staff the open hours of their exhibit space.

Here are several ways you can help spread the word about Works:

Works was founded in response to the Museum of Arts. Every show at the Works is a new surprise. People who know the works realize this.

ICA was founded in response to Works. They thought Works wasn’t selective enough. They have about a half-dozen employees. You have to pass the muster with the one lead curator. This is the norm in the art world.  You have to cater to their sense of aesthetics  minimalistic art or

SoFA is considered the arts district. There’s supposed to be a big public art center around Diridon Station.

Works is sponsored by the City of San Jose Cultural Affairs and _____ ? Some of the shows have sponsors as well.

AIGA & San Francisco Design week for Liquid Agency was a financial sponsor. for just the one show that was the transportation show.

Works does pay rent $750 for 1200 SF. It’s a great deal for them. it’s nonprofit pricing. They’re in their 3rd year of their 3-year lease so they’ll have to negotiate soon.

The city wants to keep the whole SoFA space going. They’re like 2nd to the Museum of Art as a long-standing nonprofit arts organization in town, there’s also the quilt museum and a few others. MACLA.org

The annual grants are always submitted and come from the city of San Jose and SV Creates. They’re competitive grants. The city publishes its scoring, but SV Creates doesn’t.

Become a member of Works/San Jose

One of the main perks of joining is that you become part of a community that fosters communication between artists, curators and the public. In addition to attending events, you can also request to participate in the members-only Facebook group for 24/7 access to the community.

“A lot of people see us as a first-chance kind of place to expose yourself artistically. We’re willing to take a chance on people,” Joe said. “Works has been the starting point for a number of artists who have made a name for themselves.”

“A lot of people got their start on the Works Board of Directors. Most people had no other board or organizational experience. Angie Helstrup-Alvarez her first experience was with Works and now she’s executive director for MACLA/Movimiento de Arte y Cultura Latino Americana, a center for Latino arts.  Angelica Muro was gallery coordinator at Works, then later founded a gallery. Now she’s a professor at CSUMB. Others on the San Jose Museum of Art and and other arts organizations around the Bay area got their start at The Works.

Gain leadership skills as a board member

“Works board meetings are open to the public, so you’re welcome to come by and ask questions. We also have an annual member meeting. As a 5013C, we encourage members to attend our board meetings. Although we have a full slate of officers, we’re always looking for people who are interested in being active on the board,” Joe said.

President Joe Miller (mostly updates the shows on the site)

Binh Danh was the facilities director at Works and he’s now a professor at San Jose State University. Today he’s considered one of the top in contemporary experimental photography. He came up with a process of at SJSU to print into the chlorophyl of leaves and save it for a long time. His work has been shown nationally and internationally.

Joe has been instrumental in leading Works. We use Akzidenz-Grotesk typeface, but we purposely don’t have a logo.  <ask Joe for best link to this font?> 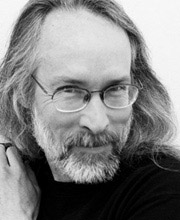 Joe Miller is a designer, design educator, artist, and spoken word performer. He is principal of joe miller’s company in Santa Clara, and has taught design at San José State University since 1988. Joe’s work has received national to international recognition in more than 60 books and publications, and he has received more than 120 regional to international awards for design.

His work has been included in exhibitions nationwide and is in the permanent collections of the AIGA National Design Archives and the Denver Art Museum. His work in poetry and art has been published and exhibited regionally. Joe is President of the Board of Directors of Works/San José, is a member of the Boards of AIGA SF, and Poetry Center San José.

Mercury News did a big story on Joe Miller and

People only had to be a member to be in it. A Crack in the