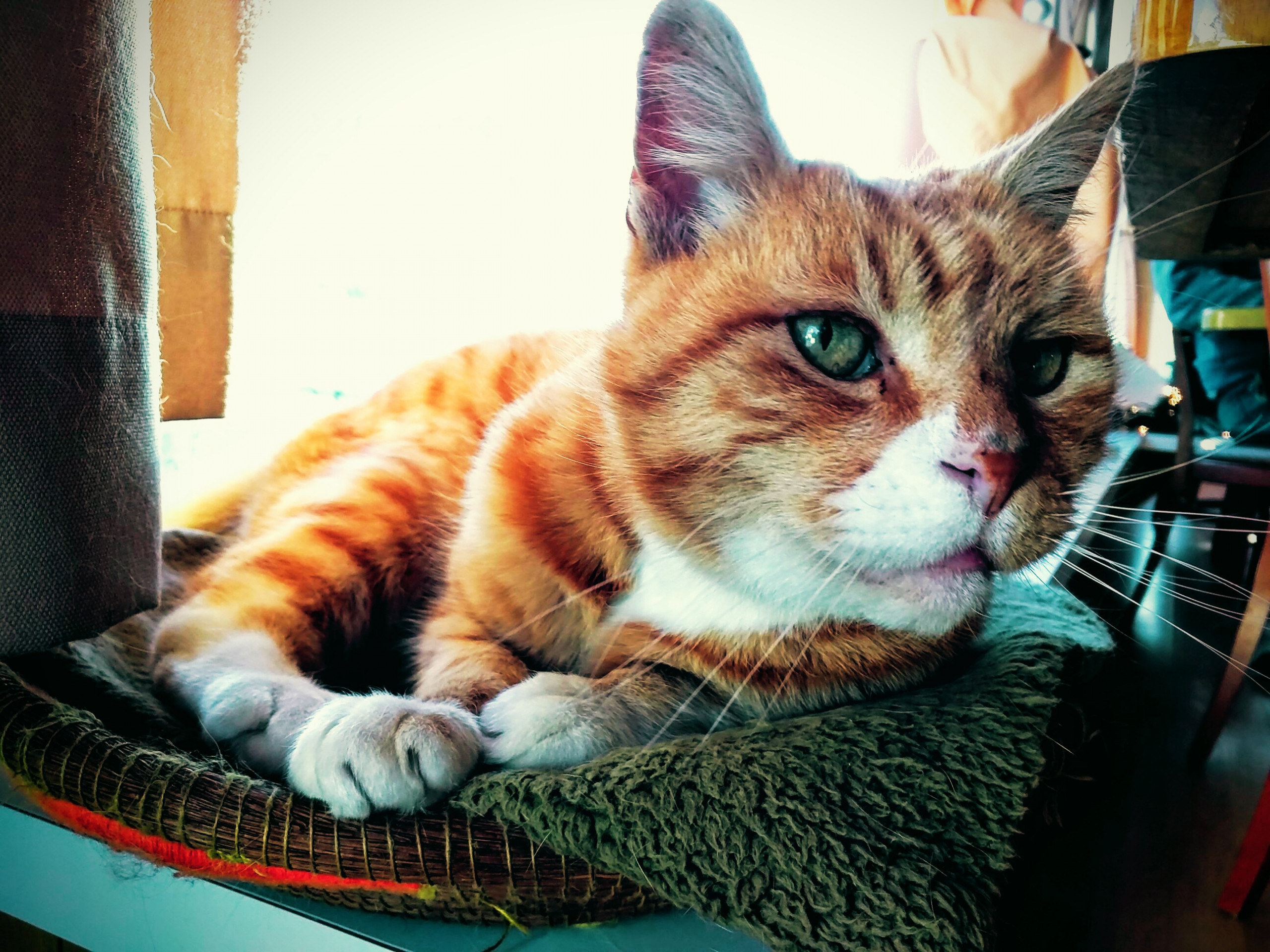 My husband and I walked to Orange Cat Cafe from a beachside condo where we stayed the prior night.  I ordered an Americano, and oatmeal with bananas. Bob placed his order and paid. 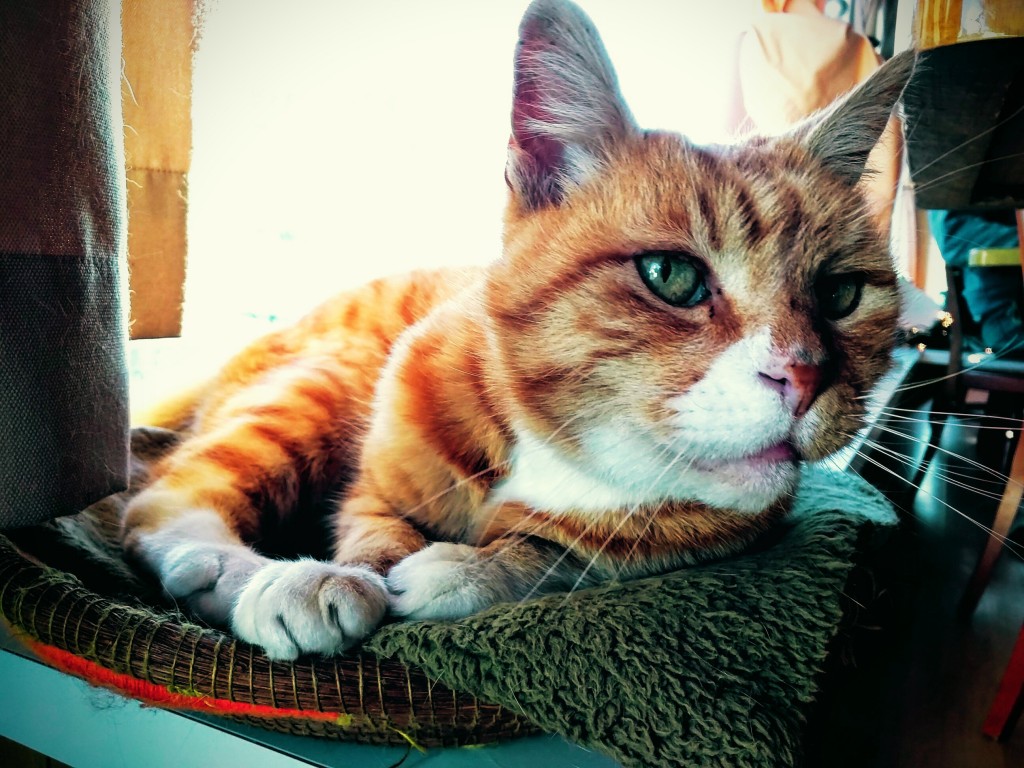 Morris the cat saw us before we saw him. He decided to get up and greet us.

We sat down to wait. A cat tip-toed toward us, whispering “meow” to welcome us. Bob reached his arm out inviting him to come closer. The cat circled around  a few times before he jumped up on the deep window sill to get closer. He stepped onto Bob’s knees to greet him.

I love pet-friendly shops. I reached over to pet the orange cat and he stepped over to my lap.

“Yep, he’s lived here his whole life. This is his house,” she said.

“Yeah, this used to be a flower shop.” The previous owner passed away several years ago. In her will, she said Morris had to stay with the property. He has his own house over there,” she pointed toward the small building next door. 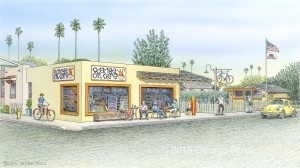 “We keep our bikes in there, but he has his own couch and entry.”

“It’s funny. I tried to change his food, but he wouldn’t eat it. The 9Lives people probably don’t want to hear this. This Morris likes Friskies. He likes the dried and canned stuff. ” she said. “He usually gets about a 1/2 can of the canned stuff every day and he can eat as much of the dried stuff as he wants.”

While waiting, I did a quick search on the 9Lives Morris the Cat. He has more than 300,000 likes on Facebook! I got curious to learn more about this famous cat. All the cats that have played the 9Lives Morris have been rescues, I read on Wikipedia.

I followed Orange Cat Cafe Morris outside. He kept looking back to see if I was behind him. He meowed at me, as if he were inviting me to visit his home. He rolled in the dirt and then posed for this picture. I swear he understood everything that was going on. I soaked in all the positive energy. 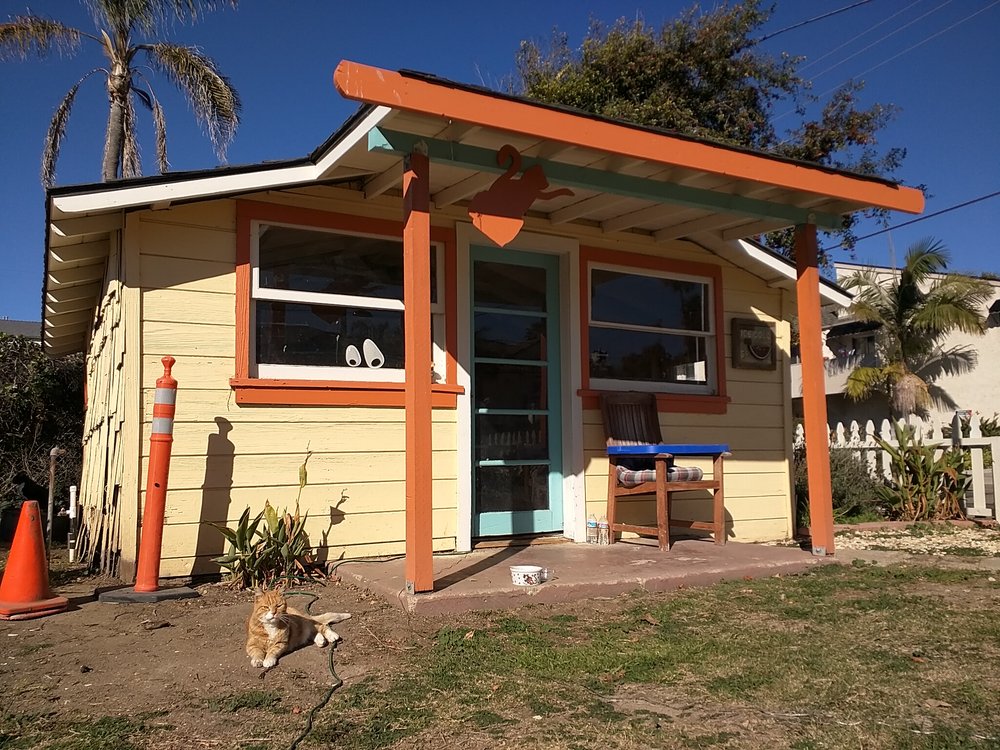 Morris the cat at his estate.

I wondered how many customers this friendly cat has greeted over the past few decades.

I noticed a black and white cat on the side of his house. So did Morris. He walked back toward the other cat. The black and white cat walked through the fence posts, obediently exiting Morris’s space. Morris stood guard near the gate for a few minutes and then jumped up to relax on his throne. 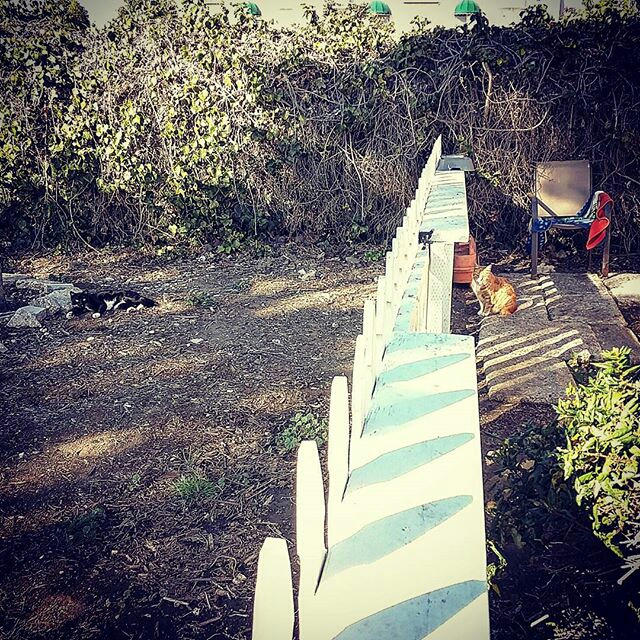 Hello Kitty, is the dirt is browner on the other side of the fence?

“Morris definitely rules the streets around here,” Riley told me. “That black and white cat is Baby Face.”

Does Baby Face believe that the dirt is browner on the other side of the fence? Does he wish he could live like Morris?

“Do you have customers who come just here to see Morris?” I asked.

“Yeah, people come see him and they don’t even order anything. There’s a campground a few blocks away. Some people have been coming to Pismo Coast Village every year for ten or fifteen years. When they come in for coffee, they ask how Morris is doing.” Riley said. 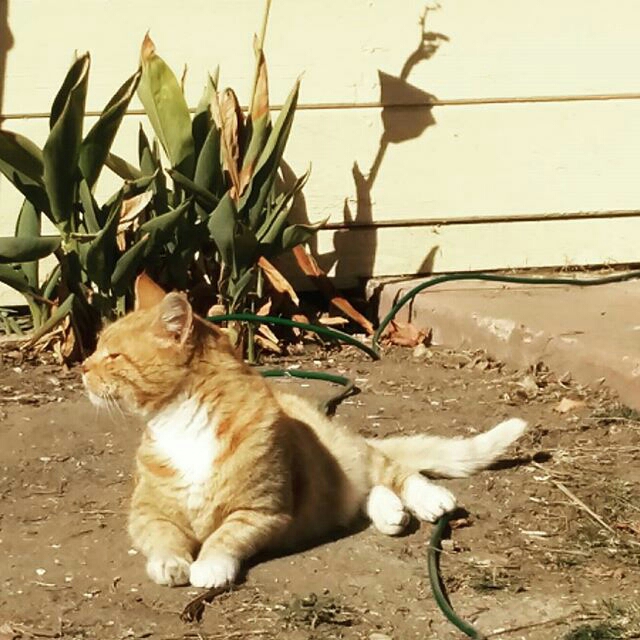 Morris the cat in his front yard at Orange Cat Cafe

Service was in true form to its location: beach-casual. The coffee was great. The homemade cinnamon/honey oatmeal was delicious. Morris was delightful. 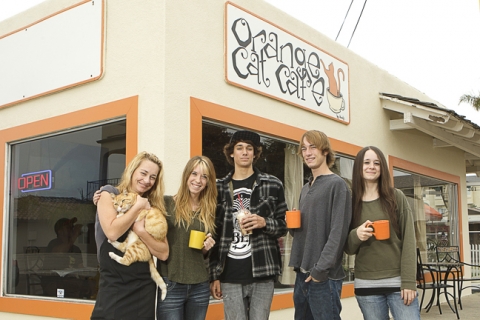 Few cats have private estates. Not many animals are given the chance to have a life and legacy like Morris. I look forward to running into this sweet tabby again on the other side of life. I’m excited to hear the rest of his story.