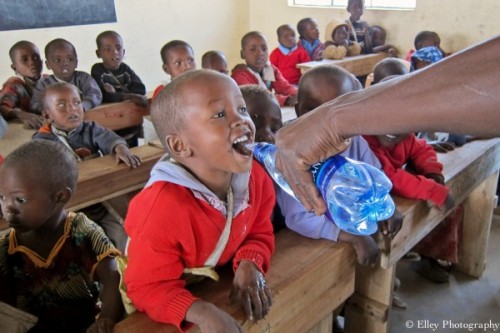 Obama‘s secretary entered the oval office and said, “We got another letter from Kenya. They’re having a very serious water shortage.”

“There’s always a shortage there,” he said. “It can’t be that bad.”

“I think it’s urgent this time,” she said. “The stamp is paper clipped to the envelope.” Sickipedia

“It’s not just an issue of quality,” my friend Elley told me. “There’s a lack of it in Kenya. People want water but it’s not always accessible.”

Elley Ho is a voluntourist who loves to travel to help people in rural communities in countries like Peru, China, Nepal and Africa. Not long ago, I interviewed Elley about her work as a photographer and educator. Here’s a story we pulled together about her recent trip to Africa:

How to Make Your Vacation Last a Lifetime

When we were working on this story, she kept mentioning the water issue she saw in Africa. Each time she talked about it, she paused. I could tell it had an affect on her. Elley didn’t go to Africa because of the water issue, but she came back from Africa with the water issue on her conscience. Here’s what she told me about her experience in Kenya:

Every morning, 60 children walk through several miles of maize fields to attend a rural school in Kenya. From 8 am to 1 pm, they’re in school with no snack or water. Paying attention in class can be difficult. 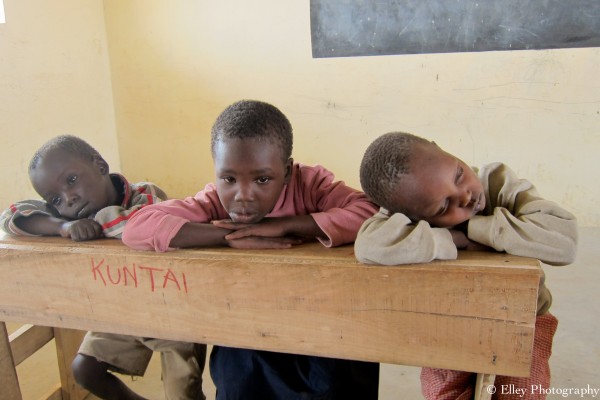 This rural school outside Narok, Kenya was one of the sites we visited during the filming of the 2013 Getty Images Creative Grant Project. The school received support from NGOs to build the infrastructure, but they still struggle with not having adequate supplies for the kids.

When we were there, we learned that these kids don’t have access to food or water during school hours. Our gracious driver overheard their stories of struggle and took the initiative to offer each and every child a squirt of water as a treat.

I saw their expressions and their joy. They’d get a squirt of water and they’d be so excited. They were like baby birds holding their mouths open waiting to be fed. 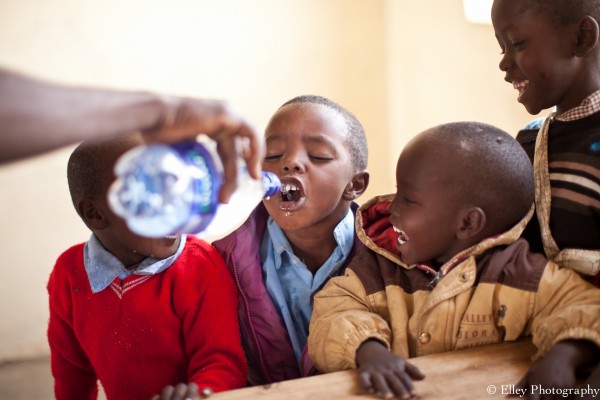 The kids enjoy school. They have to walk 4-6 miles to school every day by themselves. They’re living in all directions. There are no books on the desks. I didn’t see any visual presentations or computers. The kids all look at the teacher as she talks. Some kids have the energy and an intense desire to learn. 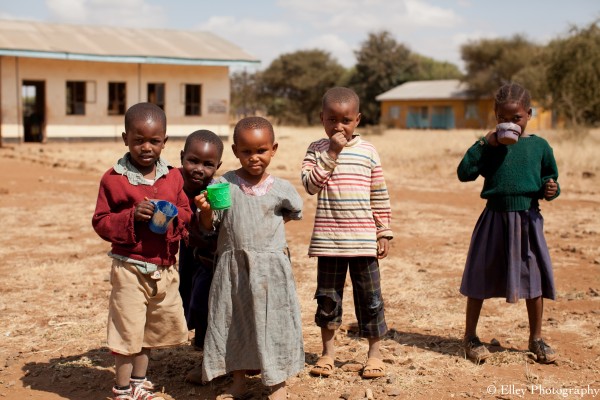 It’s flat everywhere. I didn’t see much around, except for bushes and a few trees. It’s a very dry area with no signs of water sources. The river was completely dry. During the dry season it’s just a ravine. But during the wet season, the river floods and some of the kids can even drown. They risk their lives to get to school.

So how do toilets work when there’s no water to flush, you might be wondering?

They dig a gigantic hole. You can’t even see the bottom of the pit. I can’t imagine what would happen if a child fell in.

I often saw flies on people’s faces, on their eyes, nose and lips. The flies are trying to get water too. The kids don’t even notice that the flies are there because they’re so used to it. 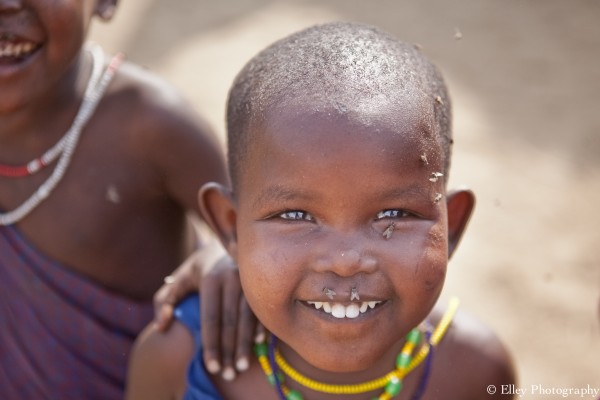 I was surprised to see that water was such a big need. When people saw me, they saw my water bottle first. I imagined all the water bottles I’ve thrown away in my life and I wished I could have given them to these kids.

They want bottles because they never buy water. To me it was just garbage, but they don’t have the money to buy them. I gave a boy a water bottle. He was so proud and began showing off with it even though it was empty. He wanted it just because it was cool to him.

When Elley said this, it reminded me of film The Gods Must Be Crazy. 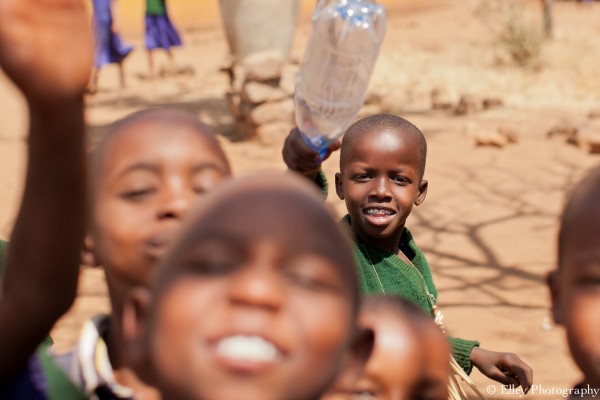 At one point we saw a crowd of people fetching water from a pipe. People were trying to fill containers with the water. I suppose I expected them to be fighting over the water, but they weren’t. Instead, they were orderly and respecting each other. They yielded to each other to let the next person have a turn. They acted like a community instead of competitors. That part seemed foreign to me. 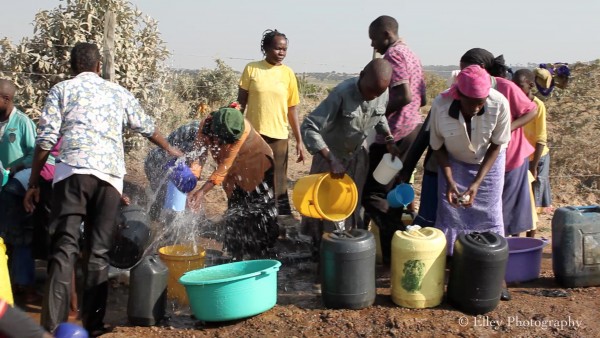 Some Americans worry about becoming sick from the BPA in plastic while Kenyans are just trying to get enough water to get through another day.

A lot of people grow their own crops, such as bananas. Then they barter among each other. The food helps to keep them hydrated. 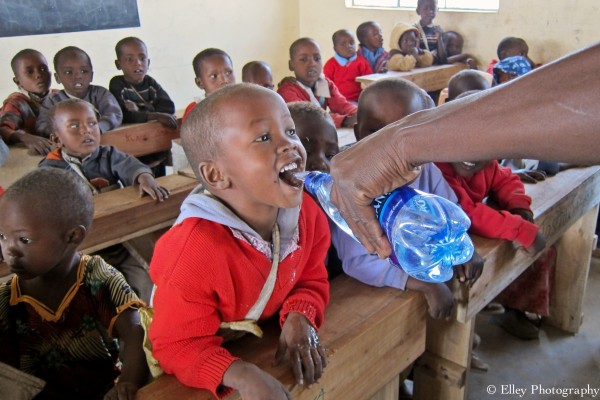 The water isn’t even a necessity for them. It’s a luxury. They have mugs that look like they come from home because they’re all different. I imagine that they get some water during mealtime at home, but they might not have it every day.

When they saw me, they didn’t look at my face. They looked at my water first. Kids came up to me with their cups and mugs because they wanted my water. 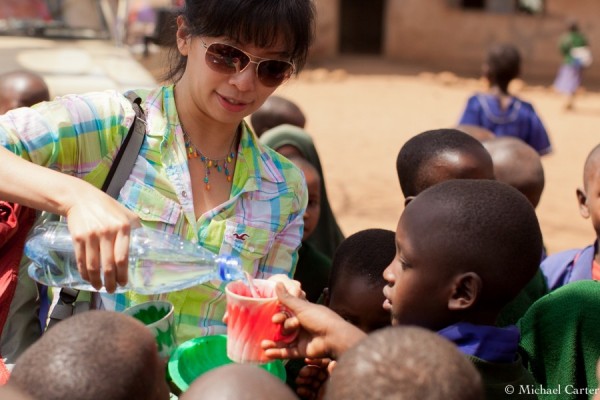 If you grow up in a place where water is out of reach, I guess you don’t feel the thirst. Maybe their system just shuts down a bit. They talk softer. The body seems to adjust.

Once when I was interviewing a little girl and I could hardly hear her. I kept asking her to speak up.

“Let me give her some water,” a boy said, “so she can talk a little louder.” He gave her a sip of water from a rum bottle. The boy probably didn’t understand the label and had no idea that the bottle was made for alcohol.

Once she had some water, she was able to speak up just a little louder.

If you live in a home with running water, it’s hard to imagine the fact that 3.4 million people die each year from a water related disease. If your kids or grandkids play at water parks and in swimming pools in the summer, it’s hard to believe that 1 out of every 5 deaths of children under 5 is due to a water-related disease.

Drink Distilled Water Daily to Detox and Defend Your Body

Before leaving her hotel room in Kenya, Elley looked back to double-check that she had everything. All she could see were the empty water bottles she was leaving behind. I probably should have taken them to the children. But just like America, they’re going to end up in a garbage dump, she thought.

Although you may not have personal experience with the world water crisis yet, we’re all at risk with this mounting issue. According to the World Water Council, “the crisis is not about having too little water to satisfy our needs. It is a crisis of managing water so badly that billions of people – and the environment – suffer badly.”

Take a big sip of water and speak up a little louder for the conservation, protection and management of our water sources.