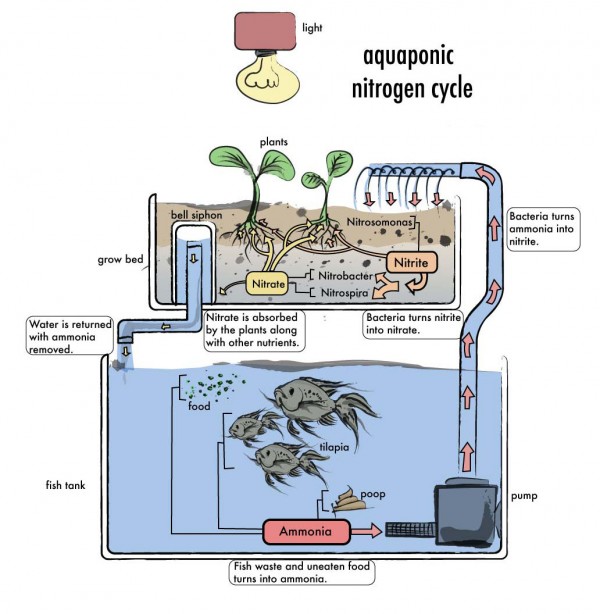 Not long ago, Ted Zimmerman learned that human waste, or treated “sludge,” was being used as fertilizer on crops near his home in Bethlehem, Pennsylvania. WFMZ. If this is what we have to do to grow food now, he thought, there must be too many people. Sludge can be treated to varying degrees of ‘safety,’ but even biosolids that are considered Class A have associated odors and potential risks.

Ted was already paying about $4 per head of organic lettuce delivered to his door by a local enterprise specializing in local and organic produce.

“Even when stores label their stuff as organic, you really don’t know where it’s coming from or how many people have handled it,” he said. He started looking for ways to grow his own food in a small area and came across the concept of aquaponics. He determined he could grow his own lettuce for less than $4 per head and know where it was coming from.

Ted did some research, learning a lot from Sylvia Bernstein, the author of Aquaponic Gardening and owner of The Aquaponics Source, a supply store.

And then he built his own pod system. The outdoor-only expanded clay media-based system came first, followed by the indoor system which allows him to grow year-round. The indoor “winter pod system” is an 8x8x8 cube that uses vertical growing structures from ZipGrow and a standard piece of 4″ pipe. Inside he can grow anything green and leafy, but not things like tomatoes (which require many more grow lights).

Outside he grows summertime produce such as tomatoes and zucchini in direct sunlight in the larger media-based pods.

The roots of the plants are constantly in water, but the plants don’t drown because there’s so much oxygen available in the water. He uses every opportunity to spray, tumble or split the water. Surprisingly, in the daytime plants take in carbon dioxide and in the evening they give off oxygen.

Ted designed his growing pods into two main parts: the bottom contains fish and the top contains plants. This humid pod supports about 15 tilapia and 9 koi in a 175 gallon tank made from repurposed Intermediate Bulk Containers (IBCs).

IBCs are stackable containers mounted into a pallet that can be moved using a forklift. Ted purchased some used IBCs and cut them in a 75/25 split. He uses the bottom (larger) parts as fish tanks, and the tops as plant containers. He purchased 275 & 325 gallon food grade Coca Cola containers for about $100 per container. 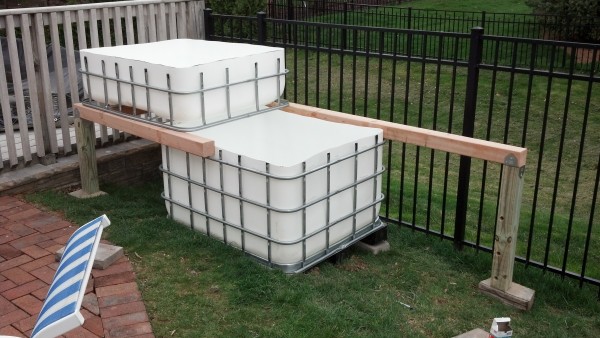 As Ted was experimenting with his first pod, his biggest learning curve was the fish. He didn’t know much about them. The koi cost about $4.75 each and within the first few months he lost about four of them. Although he learned that the colorful ones are stronger than ones with less color, he decided not to use koi again since they’re too sensitive to changes in water temperature, quality and PH. “And you can’t eat them,” he said.

“You can grow more plants, but you need more fish. Tilapia work best because they and grow and mature quickly and you can pack them in at about one fish for every three gallons of water and then harvest them as they grow. Where I live in Pennsylvania, it’s a little cold for tilapia for quite a few months of the year, but I keep them heated to about 68° F in the winter and they survive.” He purchased a STC-1000 digital thermostat and created a thermostatic pump controller to help control the water temperature. It turns the water pump on and off as needed to protect the fish.

What Ted struggled with initially was trying to keep the temperature consistent in the environment. A 20 degree temperature change is too much for koi to take. If your koi ponds are underground, the ground helps to stabilize the temperature.

“You have to keep them warm enough. They won’t eat or spawn if they’re too cold, and they don’t like it when the water level goes up and down a lot. Heating the water is easy, but cooling it is harder. If you use catfish or bass you can grow more cold-weather plants like kale. They tend to like colder temperatures.” The next stage of Ted’s system may very well be an earth-sheltered greenhouse at 56° F, which is ideal for trout and bass. It would also be much less expensive to operate since the earth provides both heating and cooling. 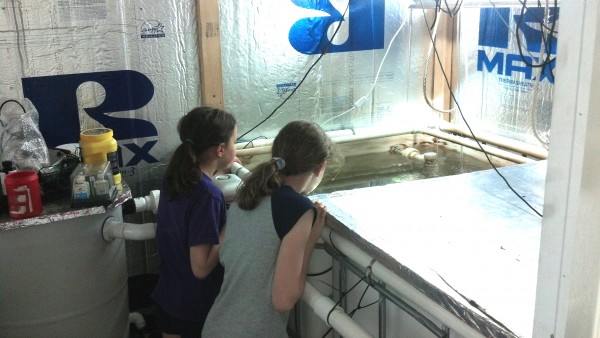 “We named all the fish,” Ted’s daughter, Kyra, chimed in. “I like ‘Cash’ and my sister likes ‘Poker.’ We named one ‘Pizza,’ because it looked like a pizza with black olives on it. We named another one ‘Noki.'” The girls went on to talk about Speckles, Pebbles and a few others that died during the learning process, to everyone’s horror. 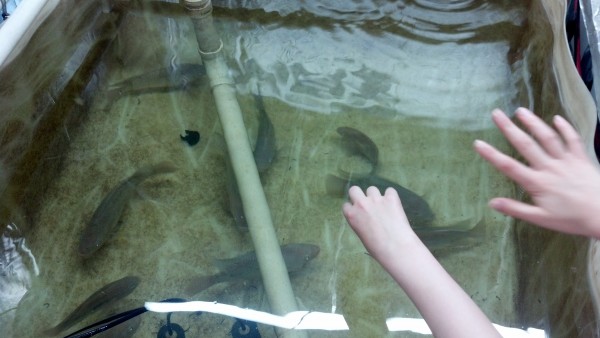 Ted buys seeds from SeedsNow.com which sells all organic, legacy heirloom seeds. His family of four enjoys butter crunch and salad bowl lettuce, for example. He changes the crop seasonally, growing things like tomatoes, basil, zucchini, summer squash and oregano. Heavier and quick-growing plants such as squash and pumpkins work better outside in the ground, Ted learned.

Gardeners learn a lot by trowel and error! Garden Digest 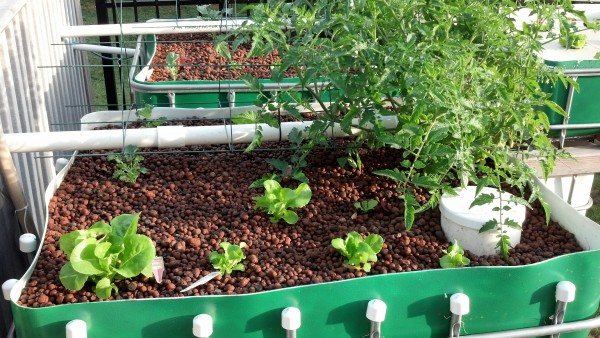 In the summer he doesn’t use the vertical indoors system. Instead, he uses a horizontal flat bed. Tomatoes have to be trellised because the growing media is very light and won’t hold the plants upright. If you aren’t already a gardener, you can begin by learning some basic gardening skills. Some plants sprout either male or female flowers, for example, and they won’t produce unless you have both.

How well is your garden growing? Only thyme will tell. GardenDigest

Kyra likes that she can have fresh lettuce all the time. She also likes having pet fish. “A spider got in in the summer pod and made a big web. He eats all the flies. We named him Noah,” she said. 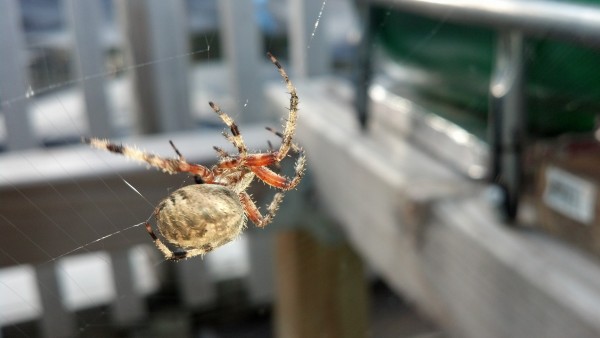 The indoor plants require some fertilizer such as iron and carbon. The lettuce grows really well. Ted can grow a head of lettuce in about 22 days. “It can grow as fast as it wants to. When you grow in a pod, you don’t need to spread plants out as far. There’s enough nutrients for the plants,” he says. In just a few months, Ted was already growing more greens than his family could eat. 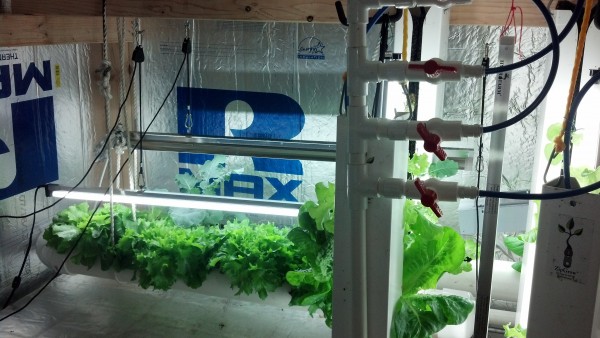 The units are even more cost effective in a city or restaurant district. When a lot of food is grown in a concentrated area, it’s very cost efficient. “They’d have to be in rows. I’d use all horizontal beds. The ideal width is about three foot rows with fish tanks at either end,” Ted says.

His great dragonfly hatch happened late last year. The first dragonfly, ‘Henry,’ was soon renamed ‘Henrietta’ when they discovered dragonfly larva within one of the outdoor tanks. Since there are no pesticides or other contaminants, both good and bad insects are in abundance and must be controlled or balanced to a degree. Dragonflies are good guys. They eat mosquitoes and many other insects. 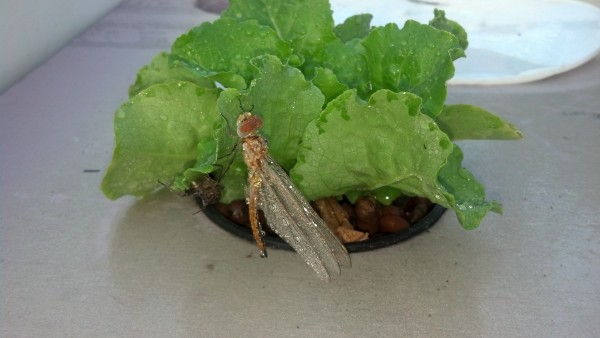 “If I can do this on a small scale, I can do it on a larger scale. Once it’s plumbed and up and running, it only takes about a half hour of interaction a day to run which is less than it takes to care for an outdoor garden.” Ted says. “Aquaponics is easy on the environment. You can do it with natural or unnatural light. Mirrors help to bounce the sunlight.”

Kyra likes the worms and ladybugs in the outdoor gardens. The girls help put worms in the dirt which helps to aerate the ground. 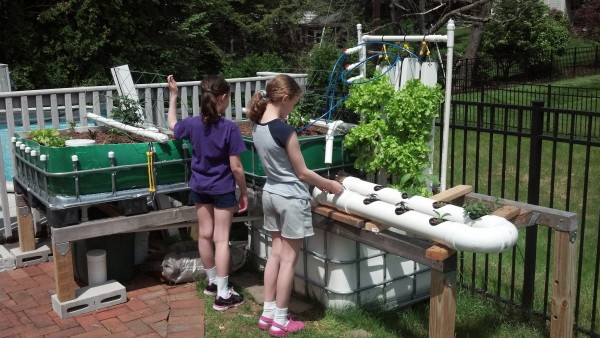 Ted invested about $2,800 to build his first system. He has his own workshop with saws and other basic tools. He admits to being a handyman. He built everything from scratch, so if you don’t already have the equipment, it could cost more.

Ted lives on about 1/4 acre. He hasn’t had any resistance from neighbors regarding his growing pod or solar-electric power (essential to offset the electricity for pumps and lights). His neighbors can see the pods but they’ve never said anything.

If you’re familiar with the Biosphere project, you know it’s difficult to create a fully closed-loop system, even with large scale biodiversity. But SkyyGreens has figured it out.

SkyyGreens Aquaponics, a skyscraper farm in Chicago, is producing sustainable organic foods in the center of the city. It’s a closed-loop system that uses 90% less water than typical farms and cuts out the majority of the cost of transporting goods from farm to table. “This is the sort of thing that every city needs,” Ted says. “Grow food within the same building that it’s being consumed.”

Scientists at the Epcot Science Project at Disney World in Florida are engineering super tomato plants. They won a Guinness World Record for the most tomatoes harvested from one plant in a year. Their sixteen-month old tomato plant produced 32,000 tomatoes within a year! PhotoGardenBee

Why did the gardener quit? Because his celery wasn’t high enough. GardenDigest. 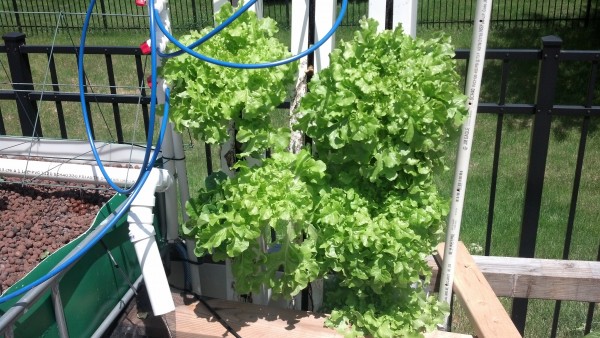 Ted would like to commercialize his pods into a farmers (pod) market where people could come to buy not only fresh, but “still-alive” produce and fish. He’d also like to help restaurants design their own greenhouse pods. In restaurant pods, chefs or customers could select fish or produce prepared and eaten on the spot. Ted’s homemade pod design may eventually feed thousands.

If you’d like Ted to help with your aquaponics project, you can reach him at bigfeats@rcn.com.